PHILADELPHIA, May 23, 2018 (Newswire.com) - Over three dozen of the nation’s top boys and girls high school and club rugby 7s teams will be competing in the High School Championship during the 2018 Penn Mutual Collegiate Rugby Championship, which returns to Philadelphia and Talen Energy Stadium for the eighth consecutive year, from Friday, June 1 through Sunday, June 4, bringing national and International attention to the Philadelphia region through the live broadcasts on ESPN2, ESPNews, and ESPN+.

The three-day rugby festival is one of the largest annual gatherings of collegiate and high school rugby teams in the world, with over 30,000 fans anticipated to be in attendance. Penn Mutual is in the fourth year of a title sponsorship for the event.

While the featured attractions are the top 24 men’s and top 16 women’s college rugby 7s teams in the United States, the cream of the crop of the nation’s top high school and club rugby 7s squads have been invited to Philadelphia this June.

Pool play begins Friday, June 1 from 10 a.m. to 4 p.m. Knock-out rounds are Saturday, June 2, while the semi-finals and finals are set for Sunday, June 3.

Earlier this year, United World Sports, the owner and operator of the largest annual rugby events in the United States (including the Penn Mutual CRC), announced that the opening round games in this year’s boys and girls high school championship tournament in the 2018 Penn Mutual Collegiate Rugby Championship will be hosted in Chester County’s Brandywine Valley.

Friday’s competition includes play-in games and recruiting opportunities at the Greater Chester Valley Soccer Association Complex located at 137 Line Road in Malvern. Saturday and Sunday, the competition moves to the Talen Energy Stadium complex, with the championship matches taking place in the stadium.

The 2018 Penn Mutual Collegiate Rugby Championship men’s winner will once again receive the Pete Dawkins Trophy, named after the All-American football standout at West Point won the Heisman Trophy in 1958.  Dawkins was a Rhodes Scholar and attended Oxford, where he used his outstanding football skills to make him a star on the Oxford Varsity rugby team, revolutionizing the game in the process.

This year, former National Security Advisor, retired U.S. Army Lieutenant General H.R. McMaster will present the Pete Dawkins Trophy to the winner of the 2018 Penn Mutual Collegiate Rugby Championship.  McMaster, one of the most decorated and respected military leaders of the past century, also played collegiate rugby at West Point and club rugby for many years.  He is a native of Philadelphia.

The men’s most valuable player will receive the Mark Dombroski Most Valuable Player Trophy, named in honor of the late Saint Joseph’s rugby player who passed away in March.

The six-team men’s rugby 7s field in the Freedom Cup – Drexel, Fordham, Harvard, Rowan, Villanova and West Chester -- is competing for a spot in next year’s 24-team field in the men’s Penn Mutual Collegiate Rugby Championship.

Since 1847, Penn Mutual has been committed to helping people live life with confidence. At the heart of this purpose is the belief that life insurance is central to a sound financial plan. Through our network of trusted advisers, we are dedicated to helping individuals, families, and businesses achieve their dreams. Penn Mutual supports its advisors with retirement and investment services through Hornor, Townsend & Kent, Inc. Registered Investment Advisor and wholly owned subsidiary. Member FINRA/SIPC.  We are proud to work together in a values-driven and relationship-based culture. Visit Penn Mutual at www.pennmutual.com. 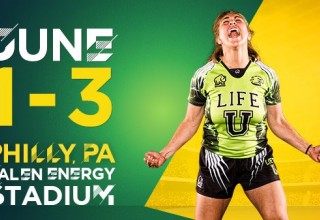