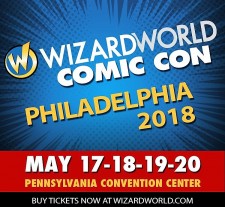 PHILADELPHIA, May 15, 2018 (Newswire.com) - From a variety of music styles, trivia, dance and personality Kato Kaelin introducing it all, Wizard World (OTCBB: WIZD) today announced the highlights of its non-stop entertainment lineup at Wizard World Comic Con Philadelphia, this Thursday through Sunday at the Pennsylvania Convention Center in Center City Philadelphia. The initiative, designed to keep the show floor buzzing throughout the weekend, will feature national and local acts of all kinds, allowing fans to enjoy more of the best of pop culture during the events. All of the entertainment is included free with any admission to the show, unless noted, and is separate from the previously announced programming panel schedule.

The “Kids Zone” will also feature a variety of activities for the younger set, including face painting, balloon art, coloring, dance parties, Jedi Training, and read-alongs. The one and only Henry Winkler will also read from his award-winning "Hank Zipzer" series to kids on Sunday at 11:45 a.m.

The Entertainment Stage, introduced last year as an added feature to enhance the atmosphere at Wizard World events, has been a huge hit, with Kaelin serving as host, including trivia and giveaways right from the entertainment stage. The stage, located just inside the main entrance, is the hub for much of the rapidly-rotating schedule, with others spread around the show floor.

Among the highlights of the Wizard World Comic Con Philadelphia entertainment lineup are:

●      Wizard World Karaoke (Thursday, Saturday, sign up at the stage)

●      The Goblin Cabaret, where sideshow and magic meet (Saturday)

●      Trivia and DJ spinning all weekend

●      Costume contest for adults (Saturday) and kids (Saturday and Sunday)

The full schedule of entertainment and programming can be found at http://wizardworld.com/programming-entertainment/Philadelphia.